Children’s story: The wolf is coming! 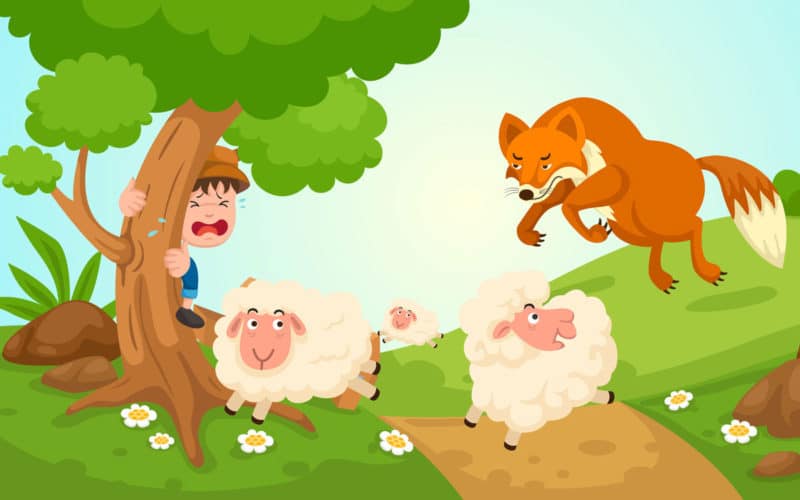 The wolf is coming!, also known as “The lying shepherd” or “Peter and the wolf” is a children’s story by Aesop that tells the story of a young shepherd who enjoyed joking with the inhabitants of his village about the impending wolf attack. A simple and easy-to-understand story that defends the importance of sincerity and trust and that teaches children: don’t lie because if you don’t tell the truth, no one will believe you.

Peter and the Wolf: A Story to Ponder

Once upon a time there was a young shepherd called Peter who spent the day with his sheep. Every morning very early he would take them out into the open air to graze and run around the field. While the animals enjoyed their freedom, Pedro sat on a rock and watched them carefully so that none of them would get lost.

One day, just before sunset, he was very bored and he had an idea to have a little fun: he would play a prank on his neighbors to give them a good scare. Then, he climbed a small hill that was a few meters from where the cattle were and began to shout loudly:

The villagers were startled to hear those shocking screams and ran to help Pedro and scare away the wolf. However, their surprise was great when they got to where he was and found the boy laughing out loud.

The villagers angrily scolded him, turned and headed back to the village.

The next day, Pedro returned with his sheep to the field. He did nothing but look at the grasses, the clouds and the sheep so he began to get bored again with nothing. How long the days were! So he decided that it would be fun to repeat the prank from the previous afternoon, after all, he had had a lot of fun.

So he went up the same hill and when he was at the top, he started shouting:

– Help! Help! I need help! I have seen a huge wolf frightening my sheep!

Peter screamed so much that his voice was heard throughout the valley. A group of men gathered in the town square and quickly organized to come to the young man’s aid. All together they set off and immediately saw the shepherd, but the wolf was nowhere to be seen. They approached and then, they saw the young man laughing out loud.

– Ha ha ha! I burst out laughing! I have fooled you again! ha ha ha!

The men, really indignant, hardly containing their anger, returned to their homes. They did not understand how someone could play such heavy jokes and in such bad taste.

Summer was coming to an end and Pedro continued, day after day, accompanying his sheep to the fields. The days passed very slowly and he needed to entertain himself with something to do.

One afternoon, between yawns, he heard a growl behind the trees . He rubbed his eyes and saw a wolf sneak up on his animals. With great fright, he ran to the top of the hill and began to scream like a madman:

As always, the villagers heard Pedro’s cries, but believing that it was another lie by the boy, they continued with their tasks and ignored him. Pedro kept screaming desperately, but no one came to his aid. The wolf ate three of his sheep without him being able to do anything to prevent it.

And that was how the young shepherd realized the mistake he had made by making fun of his neighbors. He learned his lesson and never lied or played pranks on anyone again.