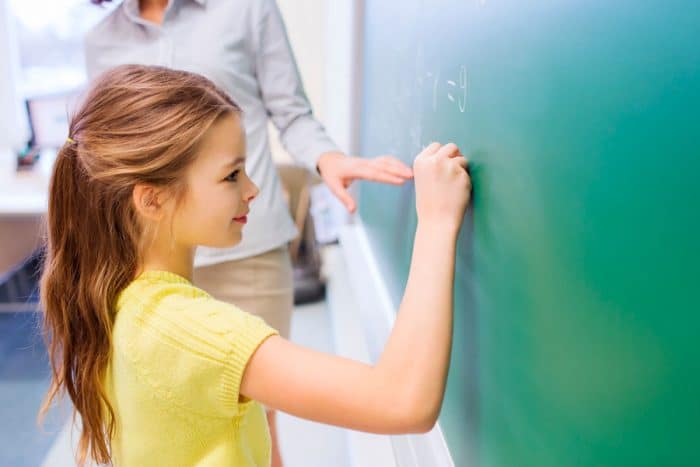 One of the first math skills kids learn in school, once they know how to add and subtract, is multiplication. Multiplication is nothing more than a shortcut to get large sums faster, which means that it does not require a lot of memory but a good dose of reasoning. However, since the most usual thing is to ask children to memorize the multiplication tables, they come to hate them. Luckily, there are other methods for little ones to learn multiplication.

1. Wait for the right moment

One of the most frequent mistakes that parents make in the education of their children is to teach them content for which they are not yet ready. That’s why the first step in teaching your child the multiplication tables, and probably one of the most important in order not to set a negative precedent, is to determine the appropriate time. The child will be ready when they are mature enough to take on new content and have acquired essential knowledge such as addition and subtraction. Another factor that we often forget but that is essential is motivation, it is essential that the child is motivated to learn to multiply.

2. Explain what multiplication consists of

Most children like to understand the reason for things, they are passionate about discovering what they are for, this is how they motivate themselves. That is why it is essential that, rather than giving him the tables so that he learns them by heart, you explain to him that multiplication is nothing more than the successive addition of the same number and that it is very useful for quick calculations . Only when the child understands the usefulness of multiplication can she find meaning in learning tables.

3. Teach him the basic multiplications

Often parents, and even some teachers, think that learning to multiply is the same as memorizing, but this is a serious mistake. Tables are actually the last thing you should learn. First you should start with basic and very simple multiplications, such as 2 x 2, 2 x 3 or 3 x 3. It is about developing the ability to multiply and understanding the process that is in the base. To work on the concept of multiplication, you must indicate that it is the successive addition of the same number, so that 2 x 3 means 2 times 3; ie: 3 + 3. And so on. 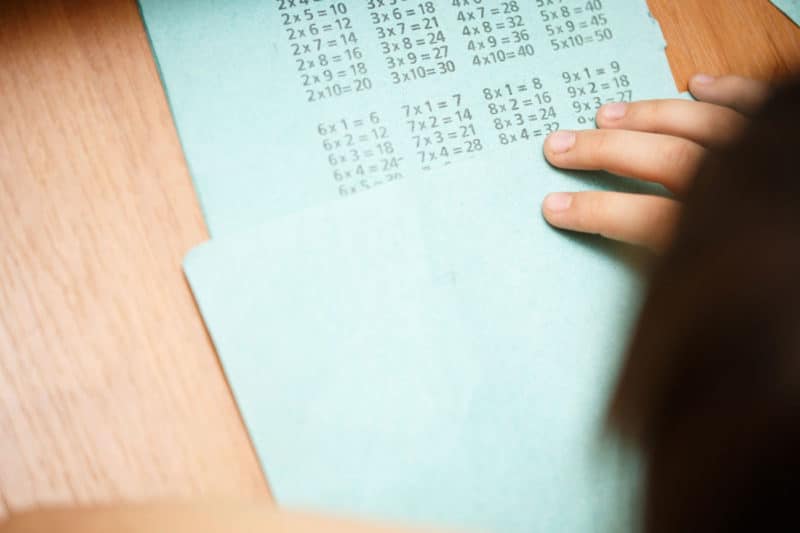 4. Motivate him to practice

Multiplication is not only logical, it also requires a good dose of practice, so the child will reinforce the knowledge acquired and, at the same time, increase confidence in her abilities. Any place is good to practice, especially away from home, so that he understands the importance of this new skill. For example, when you go shopping you can ask him: How much should I pay for 3 jars of jam if each one costs 2 euros?

5. Move on to the multiplication table

Once your child has understood how basic multiplication works, it’s time to teach him the tables. You can use traditional tables or a custom one. At first the most important thing is that the child handles and visualizes the table so that he can understand it. Then he can go on to learn them, although he will have to store his memory, there are different tricks that will allow him to advance faster in learning, such as: 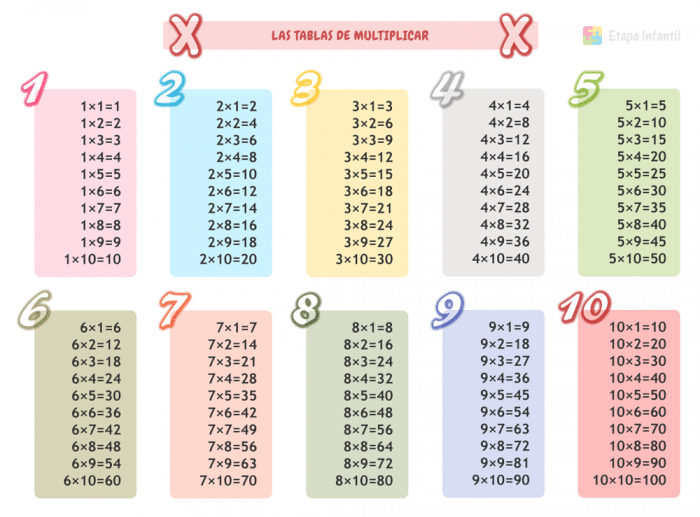 Multiplication tables to print: Folio size (horizontal) and in color 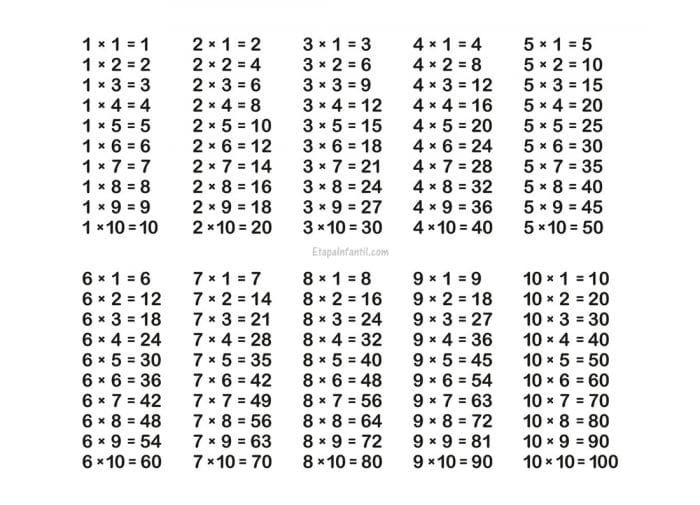 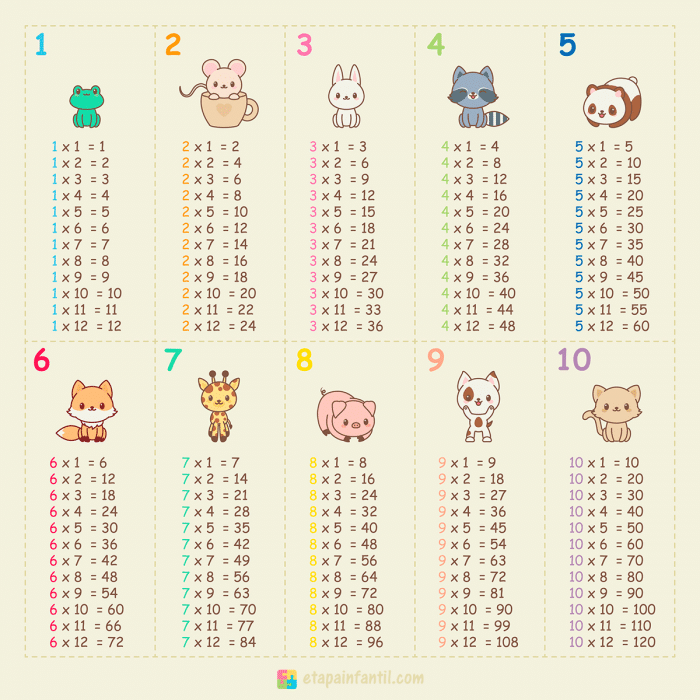 The multiplication tables from 1 to 10 in detail

This is probably the simplest multiplication table of all since the result is the same number that we multiply by 1. e It’s perfect for children to understand the essence of multiplication, which is nothing more than the successive addition of the same number as many times as its multiplier indicates.

With the multiplication table of 2, children will end up understanding what multiplication consists of, since each result is nothing more than the sum of the same number two times, that is, twice the multiplicand. A very simple trick to learn this table is to successively add two to the previous result.

Basically, the multiplication table of 3 is the addition of the same number three times or what is the same, the triple of the same number . Even this table can be applied successive addition without too much difficulty so, at least at the beginning, it is a good strategy for the child to learn to multiply from 1 to 3.

From this table multiplication begins to become more complex since in this case the results are four times the same number, which means that you have to add four times the multiplying. A detail that children should keep in mind is that the results end in 0 or multiples of 2: 2, 4, 6 and 8.

The results of this table are usually very easy to learn since they increase from 5 to 5. In addition, they always end in 0 or 5 , a fact that children will appreciate when they are memorizing it. The key in the table of 5 is to add 5 to the previous result, or what is the same, to quintuple the same number. 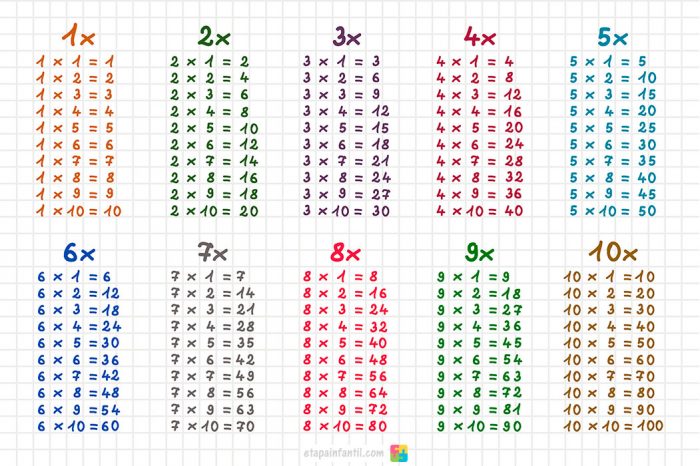 Multiplication tables from 1 to 10 to print

The table of 6 basically consists of adding six times the multiplicand and, as in the table of 5, the The result increases in stages, in this case by 6 by 6, although it is not as easy to visualize as in the multiplication of 5. However, another detail that can help children learn this table is that its results always end in 0 or multiples of 2: 2, 4, 6 or 8.

From this table the multiplication begins to become even more complex since it deals with larger sums, in this case the sum of the same number 7 times. In addition, their results do not have a specific pattern that facilitates their learning. Therefore, the best way for children to learn it is either by memorizing it, or progressively adding 7 to the previous result.

Despite being a multiplication table that works with large sums, it is quite easy to learn since the results always end in 0 or multiples of 2 : 2, 4, 6 or 8. Basically, in this table the results are the sum of eight times the multiplicand, a very simple piece of information that can get the little ones out of trouble.

In the table of 9 it is enough to add nine times each multiplicand to get the result. However, in this table there is a trick so that children can learn it faster: the first number of the results increases progressively from 0 to 9, while the second number does the same but in reverse , descends in steps from 0 to 9.

This is a very simple since to obtain the results it is only necessary to place a 0 behind the multiplicand, or what is the same, add 10 each time. Without a doubt, it will be one of the first that children learn.