The first symptoms of pregnancy 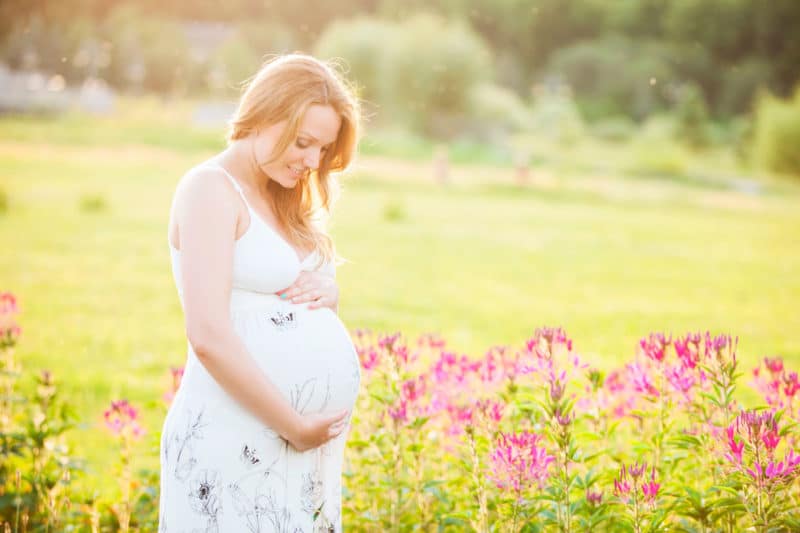 Many women look forward to the news of their pregnancy, others are taken completely by surprise. In any case, this news marks the beginning of a precious stage in a woman’s life, in which many changes await you not only from the physical point of view but also emotionally. It is a period full of new experiences that begin from the very moment of conception.

When does your body begin to change and do you notice the first signs of pregnancy?

From the moment of conception, the body of a pregnant woman begins to change. However, it is not until around the second week of gestation that the first symptoms of pregnancy begin to be noticed, as a result of the hormonal changes that are occurring in the body.

Obviously, not all pregnant women show the same signs, nor do they begin to notice them at the same time. In the same way, the intensity of the first symptoms can vary from one pregnant woman to another. There are women in whom the signs are very clear from the beginning while in other cases they are so light that they can be confused with premenstrual signs. 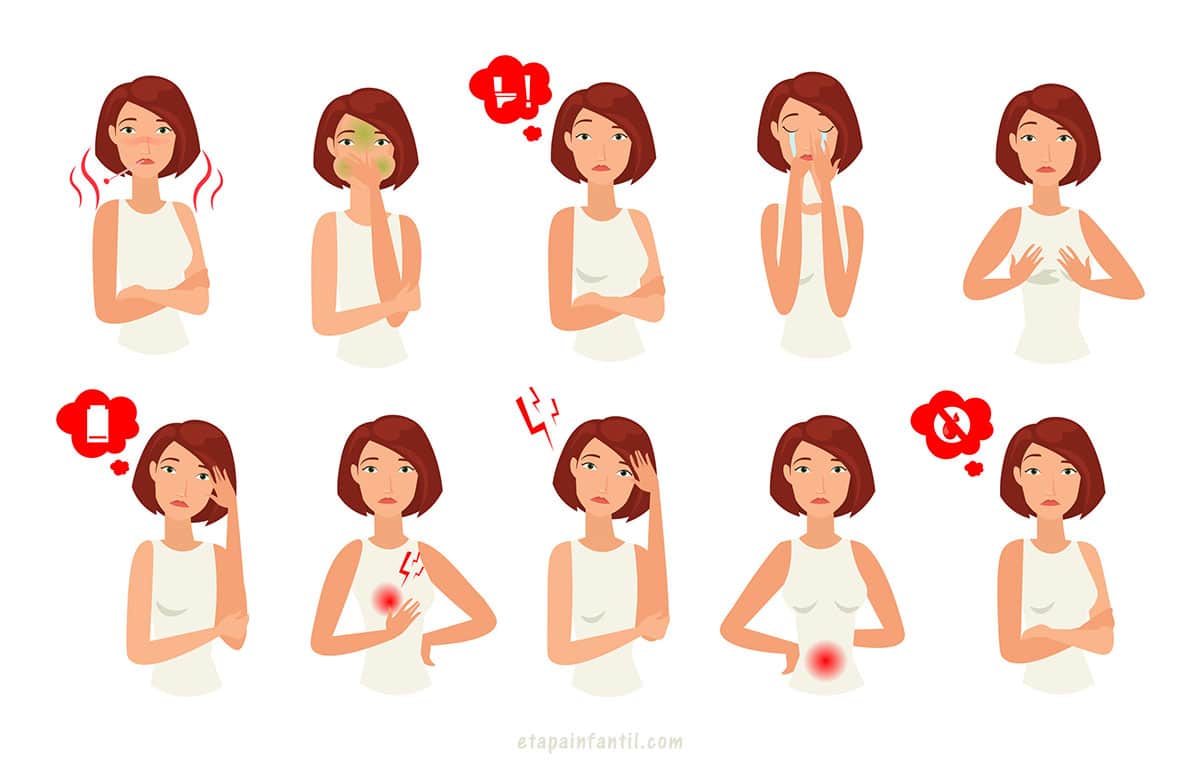 The 10 most common pregnancy symptoms

Amenorrhoea or absence of menstruation can appear as a result of stress, hormonal imbalances or the practice of intense exercise, but most of the time it is related to the beginning of pregnancy. It is the clearest symptom of a pregnancy, especially in women who have a regular menstrual period. In these cases, a delay of just one week is a sign of pregnancy with almost 90% certainty. In women with irregular cycles, wait until approximately 15 days after the date on which the period should arrive to be sure.

Approximately between the second and third week of conception, it is usual to begin to notice slight abdominal pain as a result of hormonal changes and physical transformations that are being produced in the womb. In certain cases, abdominal cramps may appear in a timely manner, which can be confused with premenstrual symptoms. In general, it is a normal symptom that will accompany the pregnant woman throughout the pregnancy, but if it becomes very acute, persistent and does not subside, it can indicate an ectopic pregnancy or spontaneous abortion, so it is A visit to the doctor is recommended in these cases. 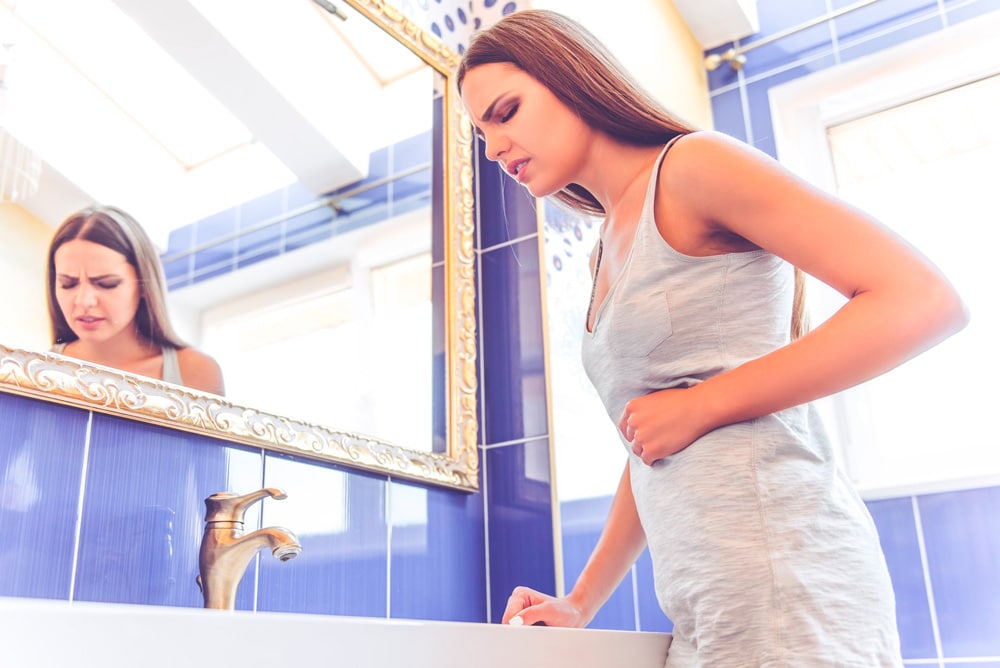 As of the fourth week of pregnancy, approximately 47% of women experience nausea and vomiting, although in some cases these digestive disorders may manifest much earlier due to the hormonal alterations caused by the implantation of the oocyte in the uterus and the relaxation of the muscles of the digestive tract.The most common thing is that these symptoms appear in the morning, but they can also appear at any other time of the day, being also frequent at mealtime. In general, these digestive alterations tend to disappear at the end of the first trimester of pregnancy.

Approximately 3 out of 10 women experience small blood loss in the first weeks of pregnancy. This is known as implantation bleeding and occurs when the fertilized egg tries to nest in the wall of the uterus. In most cases it is light bleeding, pinkish or brown in color, which can last from one to three days without affecting the course of the pregnancy. Unless the bleeding lasts for more than three days, is very heavy, or is bright red, it is not a cause for concern.

Another of the most common symptoms during pregnancy is an increased urge to urinate from the fourth week. This increase is due to the fact that the body begins to produce more liquid, which intensifies the functioning of the kidneys and to the gradual growth of the uterus that begins to compress the bladder, preventing it from filling completely. As the pregnancy progresses, it is normal for the urge to urinate to be more acute since the compression of the uterus on the bladder will be greater. 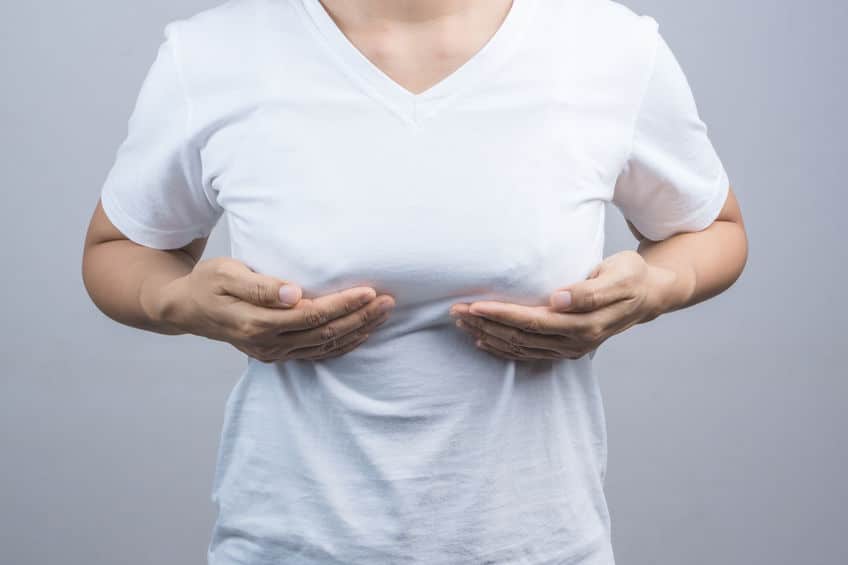 Each menstrual cycle, a woman’s breasts become swollen and more tender to the touch, which explains why women often overlook this symptom during pregnancy. Between the second and third week of gestation, the breasts begin to enlarge and become more sensitive as a result of the hormonal changes that are occurring in the body. It is also likely that the pigmentation of the areolas will become darker and that small bumps may appear on the surface of the skin. In any case, it will be a symptom that will persist throughout the pregnancy.

From the third week after conception it is common for women to begin to experience changes in their olfactory system. In most cases, it is common for A greater olfactory sensitivity is developed, responsible for the aversion that many women have towards certain odors that can become unpleasant and even cause a feeling of nausea. The symptom is due to the different hormonal changes that are occurring in the woman’s body and tends to disappear during the first trimester of pregnancy.

Around 65% of pregnant women experience a feeling of almost permanent tiredness and a lot of sleep throughout the day from the third week of pregnancy. This is basically due to the increased level of progesterone in the blood, a hormone that helps prepare the mammary glands for the period of breastfeeding, while stimulating the vascularization of the uterine mucosa and exerting a relaxing effect on the uterus. . Occasionally episodes of fatigue and a reduced level of mental alertness may also occur. 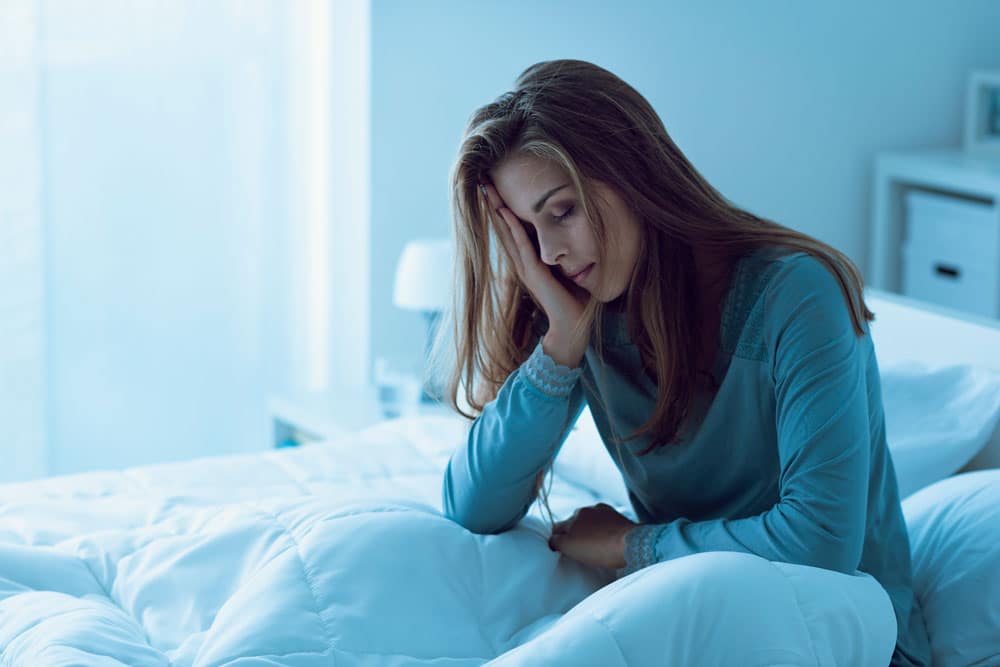 From the third week of gestation, it is normal for pregnant women to begin to experience a feeling of generalized malaise throughout the body, similar to a cold. This is a consequence of the increase in basal temperature and the decrease in blood pressure that appear as a result of the changes that are taking place in the woman’s body. In most cases, this symptom is maintained during the first months of pregnancy.

Emotional ups and downs affect approximately 37% of pregnant women from the third week of pregnancy. They are due to hormonal changes that influence some neurotransmitters in the brain, causing women to get angry, depressed, euphoric or feel anxious for no apparent reason. A particularity in these cases is that the pregnant woman is not able to control these mood swings no matter how hard she tries.

Other signs that can also reveal pregnancy

In addition to the most common signs of pregnancy, there are other symptoms that can also appear during the first weeks after conception and that go unnoticed most of the time.

From the third week of pregnancy, many women bleed their gums, especially after brushing. This is due to the hormonal changes that take place in this period they increase oral sensitivity and cause an increase in vascularization in the area.

Increased vaginal discharge is one of the most unnoticed symptoms during the first weeks of pregnancy. This increased flow is a consequence of hormones that stimulate the production of the mucous plug to protect the matrix from possible infections. In these cases, the vaginal discharge is characterized by having a whitish color and being practically odorless.

Acne is another symptom that may indicate pregnancy and is often overlooked. It is much more common in women who had acne as a teenager, but any woman can develop it as a result of hormonal changes. 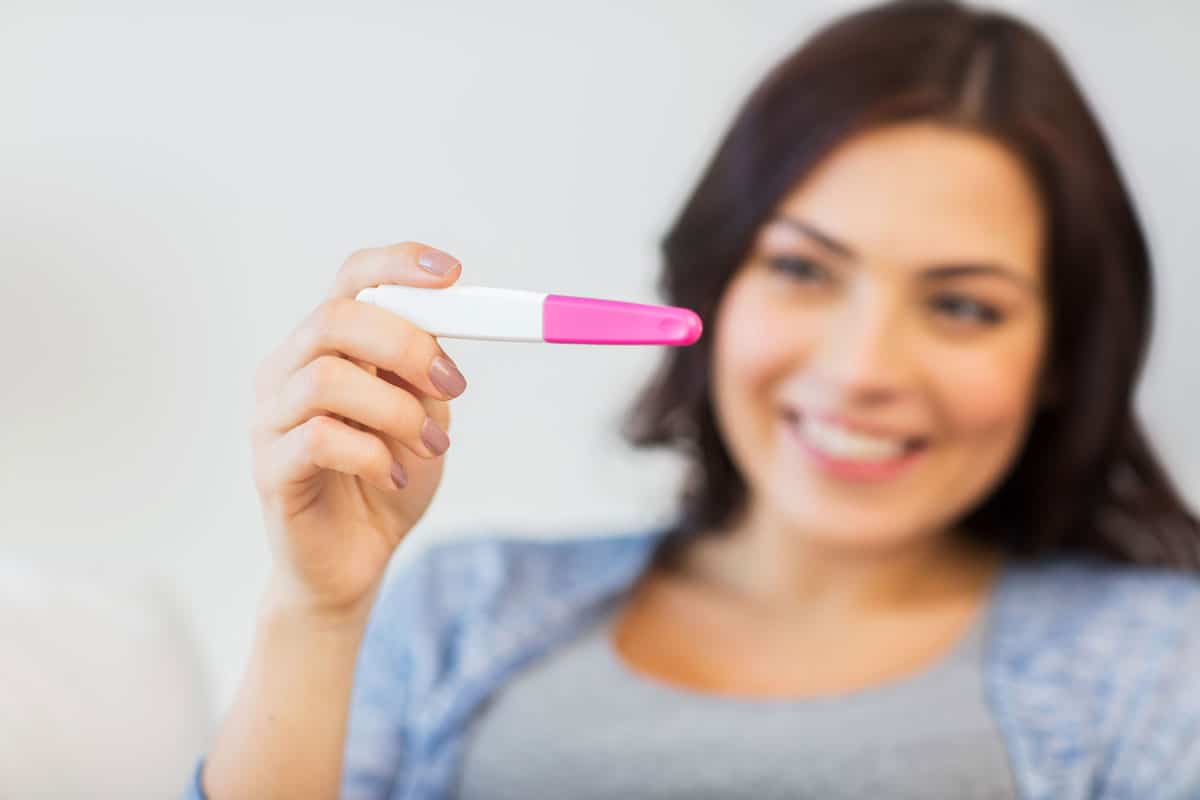 How to make sure you are pregnant and how many weeks are you pregnant?

After detecting the first symptoms, the easiest way to confirm the The news is with a pregnancy test that can be found at any pharmacy or even bought online. It is recommended to wait at least five days after the menstrual delay to carry out a pregnancy test since it will not be until then that you will have sufficient levels of the hormone hCG or pregnancy hormone.

Human Chorionic Gonadotropin , as it is also known, is a glycoprotein hormone that begins to secrete shortly after the implantation of the fertilized egg in the mother’s uterus. During the first few days, their concentration is very low, making it practically impossible for a pregnancy test to detect them, but as of the fifth day, detectable amounts accumulate in the blood and urine. /p>

If you are uncomfortable buying a pregnancy test at a pharmacy in person, you can always buy it at an online store like Amazon and receive it within 24 hours. We give you three examples:

Once the pregnancy is confirmed, you can also determine how many weeks you are using a pregnancy calculator or gestogram. It is a fairly accurate and very simple method to use since you only need to know the start date of your previous period.

Don’t let emotion paralyze you: What to do When do you know you’re pregnant?

After the result of the pregnancy test is positive, the next thing you should do is go to your GP to confirm the pregnancy with a blood test > which basically detects the levels of the hormone hCG in the blood. In a matter of days you will know for sure if you are pregnant and you will be able to visit your gynecologist for guidance on the care you should maintain during the rest of the pregnancy.

What does a mother who does not breastfeed feel?

The changes couples go through after having a baby

Basic care of the umbilical cord